This build is designed to farm the Slave Spirits found during the quest Destroy the Ungrateful Slaves (from Primeval King Jahnus in The Shattered Ravines) for unid golds (including Dead Swords) and materials such as dust or bones. It is also possible to get Q8 weapons here as well. In order to farm them over and over again, before engaging in battle, you will need to let them kill the Primeval King. This farm is done in Hard Mode. 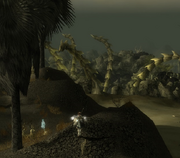