In Alliance Battles, mobbing is the term used to describe a situation where two or more parties combine into one large group (i.e. a "mob"). A mob of six or more players can be difficult to kill, especially when unorganized parties attempt to tackle the mob. However, mobs sacrifice the ability to capture shrines quickly, and is naturally countered by a 4-4-4 capping strategy.

Mobbing is a fairly simple tactic and is often the result of teams not having any real strategy. Multiple groups meeting together at shrines is usually the initial cause of mobbing, as unorganised groups will approach shrines that are already being capped, whether the odds are in their favour or not. Additionally, loose players may link up with other groups and eventually snowball into a mob.

A mob has several psychological affects on players of both sides. Allied players may feel drawn to the mob due to the apparent safety in numbers and the ease at which the mob is defeating opposition, and will often attempt to rejoin the mob after being killed, resulting in a consistent flow of players into the mob. On the other hand, inexperienced players on the opposing side may be tempted by the action and the possibility of knocking off as many players as they can. These gung-ho team members may attempt a solo effort, often pulling the mob towards other teams and creating a domino effect by getting the entire team involved in a pointless skirmish.

It is important to consider that once a mob has been formed, it will be difficult for teams and individual players to split from it. Organised teams are often able to pull away from the group and focus on capping, but inexperienced and unorganised teams will instinctively rejoin the mob despite the rest of the team calling otherwise. 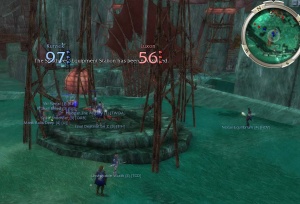 Mobbing is usually unplanned and irreversible. This screenshot shows no less than nine Kurzick players coincidentally taking the same shrine. Despite their small lead, the Kurzicks lost the match.

In general, mobbing at the beginning of a match will put the side at a severe disadvantage, as the mob cannot cap shrines as quickly as a split team. Creating an early mob is a risky move for unorganised teams, as it will be difficult to get team members to split when necessary.

Maps such as Ancestral Lands and Kaanai Canyon often encourage mobbing as the capture points on the bridge offer strategic advantage to the opposing team and are easier to cap. This results in the entire team rushing to those points and engaging. But even on these maps, the other team can simply ignore this mobbing and concentrate on taking the remaining shrines. Mobs also form often in the defending team's base if the attackers get in.

Other maps may have paths that split teams will use to create a small mob for a temporary advantage, or funnel several teams to clash with each other. For example, the south flank of Etnaran Keys allows the centre and south groups of both sides to converge easily. Organised capping teams will temporarily mob, usually to dissuade each other from engaging and pushing through to capture deeper shrines. Players or teams breaking off to engage the opposing mob will usually be annihilated. Teams should split off to cap different shrines once the threat is past.

The most common mistake teams make is to remain in a mob without capturing shrines at the beginning. While killing players earns more points (3 per kill, as opposed to 1 point per shrine every 7 seconds), shrines provide a continual contribution to the team's score, and killing players is not steady enough to focus on in the early game.

As the game progresses, one side will usually have the upper hand. At this stage, especially when that team is holding most (if not all) of the shrines, mobbing will allow the team to kill opponents much faster, scoring more points and preventing the opposition from capping. Furthermore, mobs may entice opposing players to attack instead of focusing on capping.

The same disadvantages of mobbing apply in late-game: it is slow, clumsy and inflexible. It is also inefficient -- if the opposing team is still capping, the mob won't earn as many points compared to splitting into cap groups. Mobbing in late-game has a greater chance of succeeding when the score difference is at least 100. Mobbing with scores equal is nearly suicidal, as even a solo capper will provide more points than rolling over enemies. Often in AB matches, the decisive factor is one team mobbing too early and allowing the opponents to capture shrines, easily turning the game around if the score difference is close enough.

When you see a large group of opposing players, the safest option is to simply avoid it. Clashing with a team of equal size is enough of a gamble; trying to take on 6+ players is nearly suicidal. It is not impossible to take out small mobs, but the risk is generally not worth it, and focusing on capping will help the team more than attempting to knock out an army.

If the team is given the choice as to attack or flee, the team should consider the following question: Can I actually achieve something? Another crucial mistake is to waste too much time trying to make an impact. Even if the mob is dispersed or neutralised, shrines still need to be capped. Consider the current balance of power before engaging a mob. Some players believe that engaging a mob will hold it off for a sufficient amount of time to allow other teams to cap safely. Most of the time, this results in giving the mob free points and buying no time. However, it is possible for an organised team with appropriate builds to hold up mobs, or even annihilate the entire mob.

If forced to deal with the mob, consider the following:

Tactics as a mob

Due to the chaotic nature of Alliance Battles, it is inevitable that teams will form a mob. This is most often due to several teams reaching the same point on the map and deciding to follow each other, attracting any allied player they come across. There are some occasions where mobbing can be beneficial, albeit inefficient. Nonetheless, some useful tips include:

Often, more experienced or organised team members will split from the mob in order to salvage the match by capturing as many shrines as they can, often in vain. It is possible for like-minded players from different teams to form an ad-hoc capping group, and many a battle can be turned around due to the actions of several individuals. Again, a common misconception is that mobbing brings about this turnaround, but is more often further from the truth.